Offshore wind developments – what will the NZ framework look like?

With the New Zealand Government in the early stages of designing an offshore wind licensing regime, we review the comparable framework in Australia and look at the lessons that can be learned from New Zealand’s existing offshore licensing regimes. We also explore the potential areas of focus for legislation currently expected to be in force by the latter part of 2024, from licensing application requirements to decommissioning.

The Australian legislation is a purpose-built regime to regulate offshore renewables developments, and will be a useful analogue for the New Zealand regulators seeking to develop a regime fit for purpose in a New Zealand context.

The OEI Act provides for several different types of licences to be granted to potential developers of offshore wind and other renewables projects.

This regime will serve the dual purposes of allowing the Australian Government the ability to plan and coordinate the development of offshore renewables projects as well as giving potential developers and investors the certainty and time, by way of a statutory licence, to investigate, plan and consent offshore renewables projects. The OEI Act is intended to operate in conjunction with, rather than usurp or replace, all other Commonwealth and State environmental and other requirements.

The OEI Act specifies various merit criteria which are to be considered when assessing and determining licence applications. The Minister also has a wide discretionary ability to assess other matters considered to be relevant. The legislation does not provide guidance as to the relative weighting of the merit criteria.

There are four broad categories: 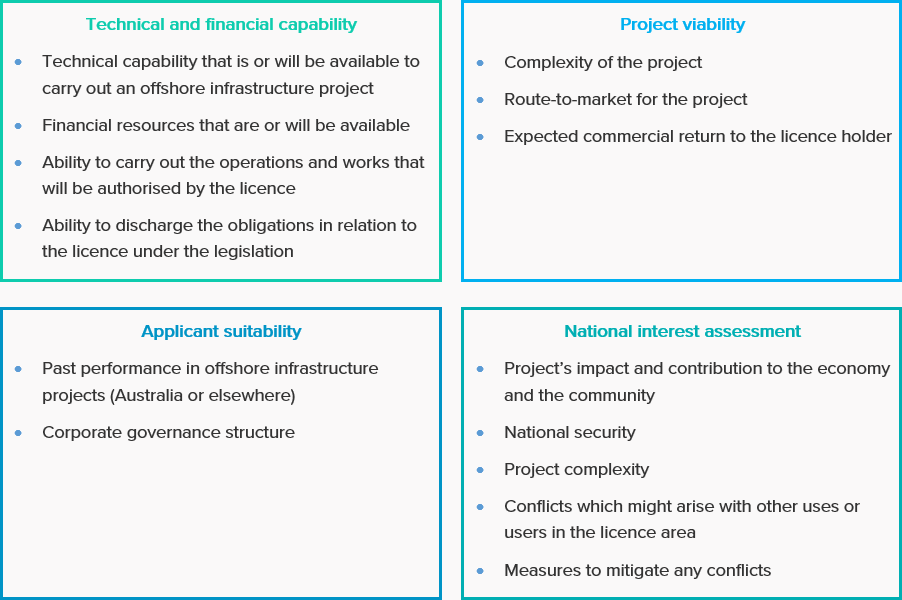 It is not yet known what approach the New Zealand regulators will take to the development of the offshore licensing arrangements for renewables (and, although broader than just wind, we expect offshore wind will be an important focus).

The OEI Act was developed based on existing offshore licensing regimes in Australia, and it is a reasonable assumption that the New Zealand regime will have regard to the approach recently adopted in Australia.

We would also expect the government to consider the existing petroleum regime in New Zealand as well as past practice in terms of how it has been applied – the Crown Minerals Act has been in force for 30 years and provides a robust and ‘road-tested’ licensing regime for the assessment, planning, development and operation of large scale commercial projects in New Zealand offshore waters.

So what do we expect will be some of the key focus areas in New Zealand?

The commercial and development opportunities associated with offshore wind have been well canvassed, so the hope and expectation will be that a robust commercially workable regime can be put in place quickly to facilitate these projects.

If you have any questions about the matters raised in this article please get in touch with the contacts listed or your usual Bell Gully adviser.

Disclaimer: This publication is necessarily brief and general in nature. You should seek professional advice before taking any action in relation to the matters dealt with in this publication.

We use cookies to provide the best browsing experience. Please review our terms of use for more information.